You are here: Home / Wellness / Iron Deficiency and Anemia ( Types, Causes, Symptoms and Treatment of Anemia)

Ohh c’mon!!! I have just entered adulthood…I can’t have iron deficiency…Isn’t this that most of us think in a normal scenario? But the fact is iron deficiency can be observed in all age groups and sex. But adolescent girls are more vulnerable to it. Iron deficiency can result either due to Inadequate dietary iron intake, increased demand, or blood loss due to any reason. Let’s get to know everything about Anemia ( Types, Causes, Symptoms, and Treatment of Anemia). 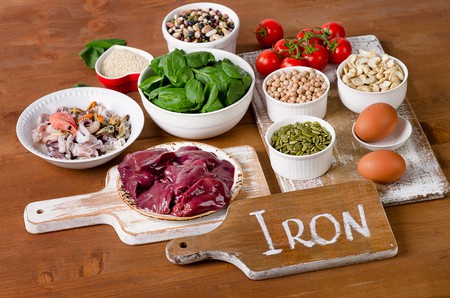 According to WHO nutritional anemia is a major public health problem in India (R1). It is mainly due to iron deficiency. Iron Deficiency Anaemia (IDA) is a global health problem (R2).

Anemia is a metabolic disorder where hemoglobin levels are less than 12 in females and 13 in males (R3). Anemia results from a reduced amount of red blood cells in the body. It leads to reduced oxygen flow to the body’s organs.

Some Most common causes of anemia are as follows.

Different types of anemia have different causes. They include:

It is caused by low levels of iron in the body. Which results in reduced hemoglobin levels(R4).

Caused due to deficiency of folate and vitamin B-12 leading to decreased red blood cell production (R5).

Caused due to inflammatory diseases like Cancer, Rheumatoid arthritis, Crohn’s disease, as well as HIV and renal diseases (R6).

Certain medicines, Toxic chemical, or autoimmune diseases sometimes lead to decreased production of RBC causing Aplastic anemia. This is rare but life-threatening anemia. Leukemia and myelofibrosis can also be a causative factor of this rare kind of anemia(R7)

Hemolytic anemia can be genetic in some cases. It occurs when red blood cells are destroyed at a fast pace and the bone marrow fails to replace these cells at the same speed (R8).

Who is Susceptible to Anemia?

A proper balanced and nutritious diet is the key to prevent anemia. The best diet plan for anemia includes foods rich in iron and other vitamins essential to hemoglobin and RBC production. The nutrients should help your body absorb iron better. Read – Indian Diet plan to increase Hemoglobin level.

There are two types of iron in foods: haeme iron and non-haeme iron.

Your body can absorb both types, but haeme iron is more easily absorbed by the human gut. The daily requirement is 150 to 200 milligrams of iron. (R12)

If the diet is not sufficient in providing the required iron one must always consider taking a supplement. But it is necessary that the prescription comes from the certified professional, Livogen Tonic is one such supplement that fulfills the daily iron requirement. Livogen tonic consists of the appropriate proportions of iron, folic acid, B complex, and zinc that help to avoid any deficiencies.

Dark green leafy vegetables are among the best sources of non-haeme iron. They include:

Some greens high in iron, such as spinach and kale, are also high in oxalates. Oxalates are compounds that prevent the absorption of non-haeme iron. So, don’t depend on them solely to treat the condition. Compliment your greens with vitamin C rich foods. Vitamin C helps your stomach to absorb iron. ( R13 )

All meat and poultry contain haeme iron. Red meat and lamb are the best sources. Poultry and chicken have lower amounts. Eating meat or poultry with non-haeme iron foods, such as leafy greens, can increase iron absorption.

As per the normal scenario, people avoid organ meats, but they’re an excellent source of iron. The liver is arguably the most popular organ meat. It’s rich in iron and folate. Some other iron-rich organ meats are heart and kidney.

Many foods are fortified externally with iron. Include such foods to your diet if it is deficient in iron:

Vegetarians can obtain their share of dietary iron from beans. They’re also inexpensive and can blend with any diet. Some iron-rich options are:

Many types of nuts and seeds are good sources of iron. You can mix these with salads, soups or sprinkle it over your favorite recipe. It blends well with most of the salad, juice, and soup recipes. Few of the examples are:

A single food alone cannot cure anemia. Instead, you can prevent iron deficiency in the body with the right foods. Eating an overall balanced healthy diet rich in dark, leafy greens, nuts and seeds, seafood, meat, and beans manage anemia. Taking Livogen Tonic in severe cases will also be helpful. Acidic foods absorb the most iron. Avoid combining calcium-rich foods and iron-rich foods as it may reduce the absorption of both iron and calcium.