Ashwagandha (Botanical name – Withania somnifera) is commonly known as the Indian Winter cherry or the Indian Ginseng. It is one of the most important herbs of Ayurveda, the traditional medicinal system in India. Among the ayurvedic herbs, Ashwagandha holds the most prominent place. It is a ‘Sattvic Kapha Rasayana’ herb. It is an adaptogen / anti-stress agent. The biologically active chemical composition of Ashwagandha includes alkaloids, steroidal lactones, and saponins. Let us see some benefits of ashwagandha roots (Indian Ginseng / Winter Cherry Health Benefits). 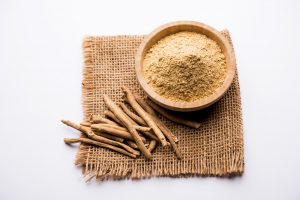 The Ashwagandha plant is a small shrub with yellow flowers that is native to Asia (mostly India), and North Africa. Extracts or powder from the plant’s roots, leaves, flowers, and seeds are used to treat a variety of conditions. Ashwagandha is commonly available as a churan. It is a finely sieved powder. You can mix it with warm water, ghee, or honey and have it at bedtime.

The root of Ashwagandha is regarded as a tonic, aphrodisiac, narcotic, diuretic, anthelmintic, astringent, thermogenic as well as a stimulant. Ashwagandha root smells like a horse. It gives them the power and energy of a horse. The leaves are bitter and are recommended in fever, pain, and swellings. The flowers are astringent, depurative, diuretic and aphrodisiac. The seeds are anthelmintic and helpful for treating worm infections.

Nagori Ashwagandha is supreme among all the Ashwagandha varieties. Fresh Ashwagandha when powdered, gives the maximum benefit. Let us take a look at the details of the benefits of Ashwagandha.

Ashwagandha used in the crude form is a potent anti-stress agent. It can be used in the prevention and treatment of many stress-induced diseases. Examples are arteriosclerosis, premature aging, arthritis, diabetes, hypertension as well as malignancy. Ashwagandha is a powerful adaptogen, hence it enhances the body’s resilience to stress.

Cortisol is a stress hormone released by the adrenal glands in response to stress. Unfortunately, in some cases, cortisol levels may become chronically elevated. This can lead to high blood sugar levels and increased fat storage in the abdomen. Studies have shown that Ashwagandha may help reduce cortisol levels, thereby reducing the clinical stress levels in the body.

Ashwagandha roots smell like a horse, and that is why it is called Ashwagandha. Ayurveda suggests that consuming ashwagandha gives the power and energy of a horse. It also has an anabolic effect, hence it increases muscle mass.

Withaferin compound in Ashwagandha helps induce programmed death of cancer cells. It also impedes the growth of new cancer cells in several ways. Ashwagandha can be used as a supplementary addition to chemotherapy or radiotherapy. It not only has an anti-cancer effect but also reduces the side effects of anti-cancer agents, which invariably reduce immunity and quality of life.

Ashwagandha acts as an anti-tumor and immunomodulatory agent and hence can enhance the life span of cancer patients. Low immunity levels of cancer patients are always a cause of concern. Ashwagandha improves the white cell count (WBC) and function, which are depleted in the chemotherapy treatment of cancer.

There are dozens of studies that show that Ashwagandha slows, stops, reverses, or removes neurotic atrophy as well as synaptic loss. Hence, Ashwagandha can be used to treat Alzheimer’s, Parkinson’s, and other neurodegenerative diseases. It can be used at any stage of the disease, or in the state of mild forgetfulness. Glycowithanolides withaferin- A and sitoindosides VII–X isolated from the roots of Ashwagandha significantly reversed ibotenic acid-induced cognitive defects in Alzheimer’s disease. Ashwagandha may be helpful in protecting neuronal injury in Parkinson’s disease.

Ashwagandha supplements may improve brain function, memory, reaction time, and the ability to perform tasks. It enhances the function of the nervous system and improves intellect and memory.

Ashwagandha acts as a mood stabilizer in clinical conditions of anxiety and depression. It induces a calming anxiolytic effect.

While Ashwagandha can serve as an aphrodisiac in stimulating libido in both men and women. It is even more valuable when thought of as an herb that builds semen potency. It acts as a stimulant and increases sperm count and motility. Using it also significantly increased serum testosterone and luteinizing hormone. It reduced the levels of follicle-stimulating hormone (FSH) and prolactin (PRL) from the pituitary gland that would inhibit male fertility. Thus, Ashwagandha is an effective sexual tonic for men. It also reduces oxidative stress. It promotes a healthy sexual and reproductive balance.

Make a paste of crushed roots as well as water and apply it on carbuncles, ulcers, boils, and pimples for healing.

Ashwagandha is an ancient household remedy for Indians. It is a tonic for children, young and old. Ashwagandha has multiple pharmacological actions like anti-stress, neuroprotective, anti-cancer, anti-arthritic, analgesic, anti-inflammatory, as well as anti-ulcerogenic effects. It is useful for different types of diseases and a remedy for all ages. These are the multiple benefits of ashwagandha.

Supplementing Ashwagandha may be an easy and effective way to improve your health and quality of life. Although it is safe for most people, certain individuals shouldn’t use it, as in few conditions it has side effects, unless authorized to do so by their healthcare provider. once or twice per day take 450–500mg capsules of standardized root extract. The recommended dosage of Ashwagandha depends on the type of supplement. Extracts are more effective than crude Ashwagandha root or leaf powder. It’s always best to consult your physician before the use of Ashwagandha as it may interact with the already prescribed medications.