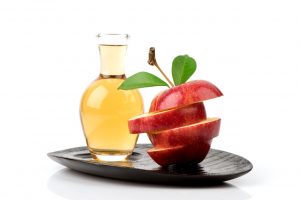 How is Apple Cider vinegar made?

Apple cider vinegar is apple juice that is fermented twice. The crushed apples are mixed with yeast or another carbohydrate. After a few weeks, yeast ferments the juice, changing the carbohydrates into alcohol. Then, a second fermentation process by adding natural bacteria changes the alcohol into acetic acid — and you have apple cider vinegar. This gives vinegar its sour taste and strong smell.

Apple cider vinegar has been used for centuries as medicine and for home cooking. It is used as a home medicine for years due to its many health benefits, including antimicrobial and antioxidant effects. It is believed that Hippocrates, ‘Father of Modern Medicine, used apple cider vinegar for cleaning wounds and relieving coughs. Studies also suggest that ACV can aid in weight loss (Research), lower blood sugar (Research)and symptoms of diabetes, as well as improve cholesterol (Research)

What is Apple Cider Vinegar with “Mother”? 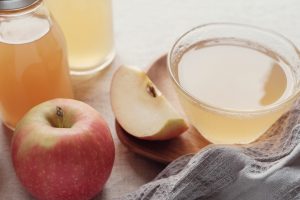 If you look at the nutrition facts label, apple cider vinegar doesn’t show high amounts of vitamins, minerals, or even calories. Its potential health benefits are found in substances that aren’t part of the standard nutrition label. ACV’s claim to fame is acetic acid, which forms during fermentation. This acid is supposed to have a variety of health benefits. ACV also contains natural bacteria which acts as a probiotic, which may help with your immune system and gut health. The antioxidant substances prevent damage to your body’s cells.

Vinegar is used in cooking, baking, and salad dressings and as a preservative. There’s a lot of acid in it, so drinking ACV straight isn’t recommended. It can erode the enamel of your teeth, or cause other problems.

Adding 1 to 2 tablespoons to water or tea is the recommended dosage. Basically, the dose should not exceed 15 to 30ml per day. It is equivalent to 1 to 2 tablespoons. ACV can be taken before a meal, for better digestion. It’s ok to drink or sprinkle apple cider vinegar on your food every day, but how much you have of it will very much depend on how much you can tolerate it, as it does have an extremely strong taste. Always drink one part ACV to ten parts water and sip it with a straw, to prevent any enamel loss.

If you take medications or have health conditions, ask your doctor before using apple cider vinegar. The recommended dose of apple cider vinegar can vary depending on the person, the health benefits they wish to fulfill, their age, and their condition.

How to consume Apple cider vinegar for weight loss?

Take 2 tsp of ACV  mixed in a glass of warm water 15 mins before a meal. ACV makes you feel fuller. Hence, it prevents people from overeating. 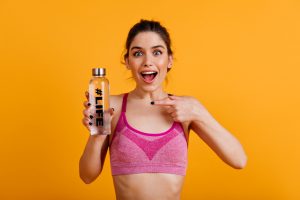 One study concluded that the product’s main active ingredient, acetic acid, can decrease blood sugar levels when mixed with olive oil. This could be helpful for people with Type 2 diabetes or prediabetes. But don’t expect vinegar alone to keep your blood sugar levels in check. To prevent or manage diabetes, follow a healthy diet and exercise plan along with supplementing ACV.

Those who took the apple cider vinegar supplements had an increased level of high-density lipoprotein, also known as good cholesterol. More tips on how to reduce blood cholesterol?

How to consume Apple cider vinegar for increasing HDL levels?

Take 2 tsp of ACV  mixed in a glass of warm water in the morning.

ACV is rich in antioxidants, hence, it boosts immunity. Polyphenols present in apple cider vinegar, fight free radicals in the body. Polyphenols, the antioxidants in ACV inhibit the free radical damage, which plays a role in forming cancers, cardiovascular disease, and other conditions. ACV not only increases immunity but also helps in fighting the already built inflammation in the body.

How to consume Apple cider vinegar for immunity?

Take 2 tsp of ACV  mixed in a glass of warm water in the morning.

ACV regulates digestion by increasing the healthy gut flora as it contains gut-friendly bacteria. There is no science to back up apple cider vinegar’s anti-heartburn power, but many people use it as a natural remedy for gastroesophageal reflux disease and heartburn.

How to consume Apple cider vinegar for acidity and reducing reflux?

Take 2 tsp of ACV  mixed in a glass of warm water 15 mins before meals.

ACV may help to reduce inflammation, which in turn will reduce the amount of uric acid in the blood. However, there are no scientific studies evaluating the use of apple cider vinegar in the treatment of gout.

ACV helps in treating bacterial infections such as E-coli, Staphylococcus aureus, and Candida Albicans that cause stomach issues, owing to its antimicrobial properties. Nail fungus, lice, warts, and ear infections were earlier treated with ACV. Applying ACV can kill bacteria and prevent further breakouts and skin conditions. Although never apply undiluted apple cider vinegar to the skin as it can cause harm. Consult a specialist for use on the skin. 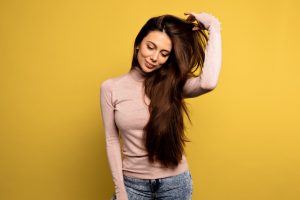 Common conditions like dry skin, acne, and eczema can be treated with apple cider vinegar. Due to the skin being naturally acidic, the pH level becomes rebalanced when applying the product and acts as a barrier for the skin. Apple cider vinegar is rich in vitamins and minerals such as vitamin B and C, which are both good for the hair and keep it strong and prevent breakage. Read – Detailed benefits of ACV on hair.

Apple cider vinegar is a tonic for strength. It reduces fatigue and increases energy levels when consumed in diluted form.

Side Effects of Apple Cider Vinegar:

Undiluted vinegar or a large quantity consumed for a long time may damage tooth enamel and can cause throat burns or stomach upset. Patients on potassium lowering medicines and diabetics should use it cautiously as it alters the level of Insulin and potassium.

When you take any healthy food in the right amount at the right time, it creates a positive environment in your body to support the bigger scenario of your health. However, one must understand that foods like ACV, can never help alone in reaching a health goal. They can create a positive environment to support your health goal. Hence diet and exercise should always be your priority. Benefits of apple cider vinegar How to consume apple cider vinegar for weight loss? helps you up to your health game.